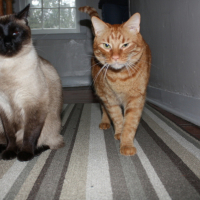 I have an ESXi server with 10 csr1000v router VMs as shown in the Advanced Technologies Labs topology diagram. From the topology diagram it seems like each csr1000v only needs a single interface which will be trunked to a single switch. Am I understanding this correctly? Could this be a standard vswitch in ESXi or does it need to be a physical switch?